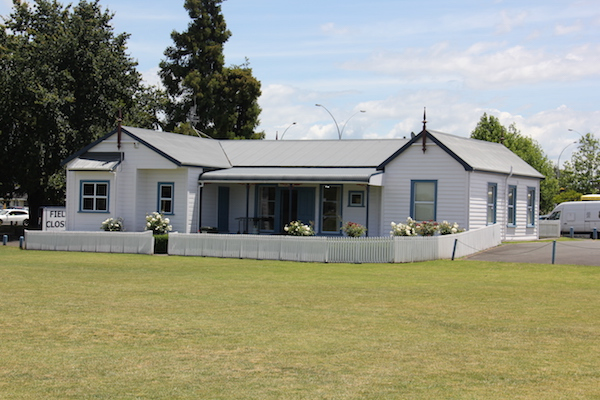 This building was moved on to its current site in 1995 and made a part of Tauranga Boys’ College educational facilities as a result of the generosity of its owners, Cheryl and Paul Adams.

The house has been part of the Tauranga District since about 1905.   It was built as a substantial home for his family by James William Oliver, a son of Charles and Martha Oliver, dairy farmers from Taranaki, who had purchased 820 acres in 1899 to divide into farms for their sons. Mr Oliver’s farm of 144 acres was adjacent to the main Waihi Highway at Bethlehem and after he and his brothers had cleared sufficient land for their farming operations, construction of his house began.

The kauri timber from which the house was constructed was brought from Mercury Bay in the Coromandel down the coast by the scow “Pearl” and through the harbour to the Wairoa Bridge where it was loaded on to a horse-drawn dray and taken to the site. The price for timber and deliver was between ten and fifteen shillings per one hundred feet.   Puriri blocks were used for the foundations. The iron for the roof and the gutterings came from Chappell’s Hardware on the corner of Eighth Avenue and Cameron Road.

In November 1909, Mr Oliver sold the land and the house to a “gentleman” from Parnell in Auckland, Major Edwin Mayfield, £14 per acre.   Major Mayfield was an Englishman who had qualified as a solicitor at Cambridge University and had thereafter sought a career in the army. Among his other accomplishments was representing his University in rugby, including touring South Africa. Major Mayfield named his new home Hawkridge and added a new wing to the building to accommodate his family including his five sons Gerard, Joe, Athelston, (Ath) Guy and Godfrey, and daughter Susan.

Major Mayfield recognised the potential of the Tauranga climate for growing fruit. Once established on the property, he and a relative, Mr N Chater, planted sixty acres in peaches, apples and pears. Initial returns were so good that the partners developed a canning factory on the property to supply Golden Queen peaches to the rest of New Zealand.

By the 1920s, however, the fruit venture ended when the peach crops were wiped out by ripe rot, the pears were cut down by government order as a result of fire fly, and the apples were struggling. The Major and sons Gerard and Athelston, set about developing the grapefruit and citrus crops, and Hawkridge Orchards refocused its horticulture, a pattern it was to maintain to the present day apart from a brief experiment in growing tobacco in the 1930s.

Major Mayfield returned to England in 1926. Gerard and Athelston took over the management of the land with Gerard and his family living in the house. Both men went overseas to serve in World War Two but only Athelston returned. Not long after his return, Athelston sold all the property except for twenty acres of citrus and the house, and for almost fifty years the Mayfields remained at Hawkridge.

In the pioneer days of Tauranga, the Mayfield family and other families like them based almost all their social activities and important occasions on their homes. Their houses had to serve all the basic needs which houses still do, but also serve as a base for weddings, christenings, significant birthdays, family gatherings and seasonal occasions such as Christmas and Easter.   It was a place of business, a landmark on journeys and a refuge from the advance of civilisation.   In the times of no electricity, no telephones, few shops and irregular communication, day to day living was a challenge and social occasions assumed a major significance.

Mayfield house was one of the social centres of the district.   Croquet, tennis and a host of children’s games were played on the lawns; a marquee was erected for special parties and the hissing kerosene lamps and candlelight lit up the formal dress of men and women who came to celebrate the occasion.   The ample lawns and developing gum trees provided an attractive setting for a number of local weddings.   A well supplied the water and also acted as an icebox for home brew, while an underground chamber provided reasonably cool food storage before the days of refrigerators.

In 1995, a local developer, Mr Paul Adams and his wife Cheryl, bought the property.   As part of the redevelopment of the land they offered the house to Tauranga Boys’ College as a building which could be developed as a learning and social centre.

The building has been refurbished internally and externally (painting, electrical etc) with huge contributions from local businesses and the TBC PTA, with some of the rooms being named after generous donors – e.g. Rutherford Room (Pam & Paul Rutherford)